Before i was coming over to the United States, i accidently found out, that I should take my Lederhose (traditional trousers the boys usually are wearing) with me, because there are some Oktoberfest in Los Angeles. And this was the best decision, because last weekend we made it and went to the Oktoberfest in Alpine Village Center in Torrance. 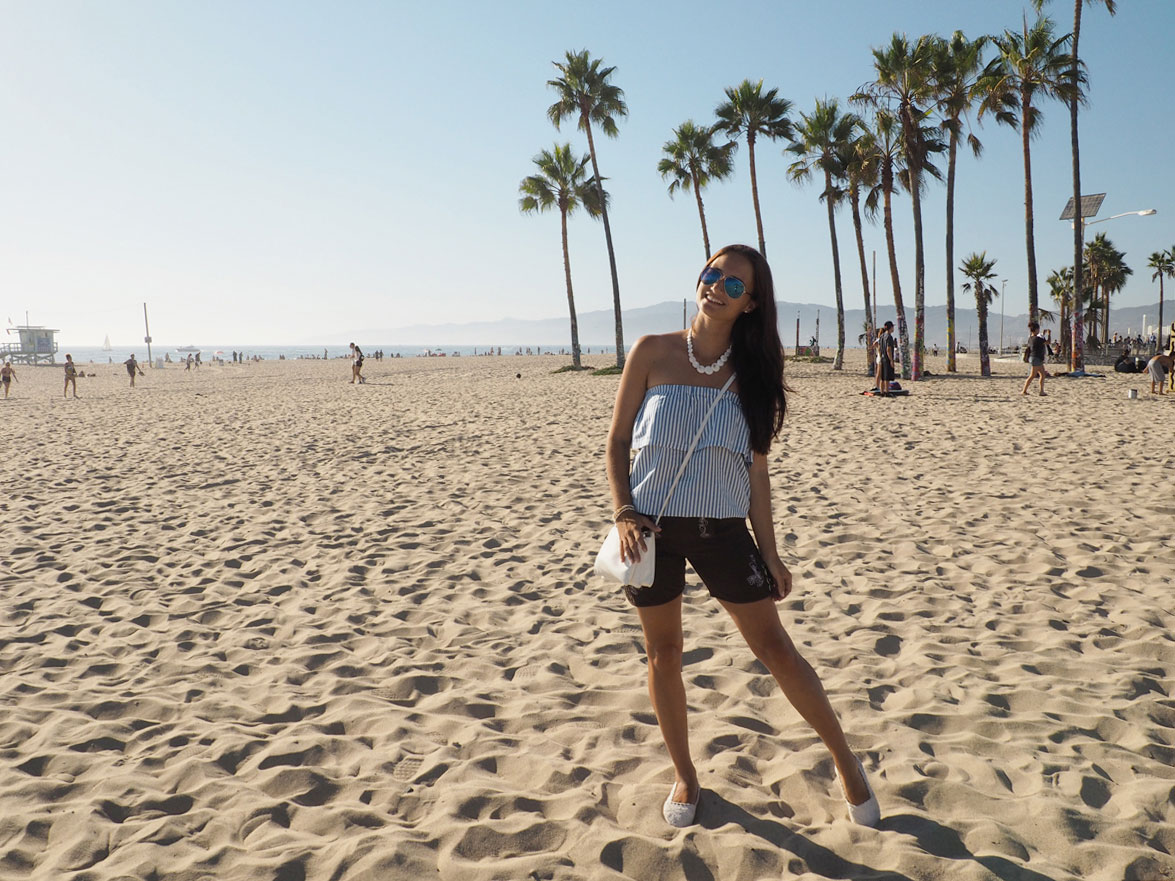 After arrival, we could already here some traditional german music when we were walking to the tent. I really liked that they were having this kind of music, because it’s something typical bavarian and austrian. Another thing i really loved is that the Oktoberfest was being held in a tent and not in a building, because this is also very traditional and with that it got this very special “Fest” flair.

I love how they decorated the tent, even though i don’t know why there are French colors on one side. (Update: I now know that they are the american colors, but i just did not get that without the stars :D) Have you also seen the castle on the back of the tent? It is castle Neuschwanstein, which i just visited before coming to the United States. Read more about Neuschwanstein in my blogpost here. 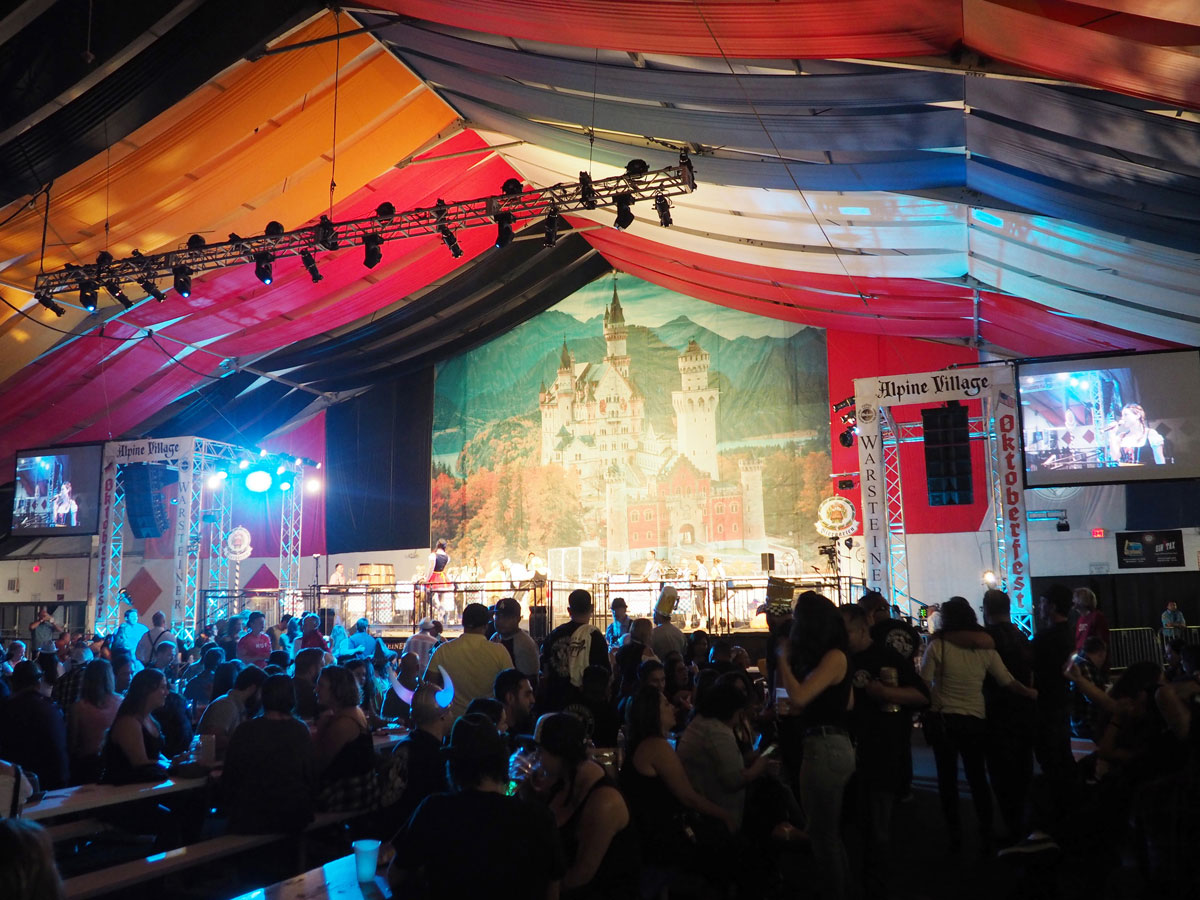 The most important thing on an Oktoberfest (the beer) was good. I was only confused in the beginning, because they were not having the typical Stein glasses. Then i found out that you can buy one, but to be honest, I don’t really need one over here, so I was just drinking beer out of the cups.

Traditional food is very important on the Oktoberfest and I was pretty impressed that they were having a huge Brezen which tasted really good and it was still warm when we got it. 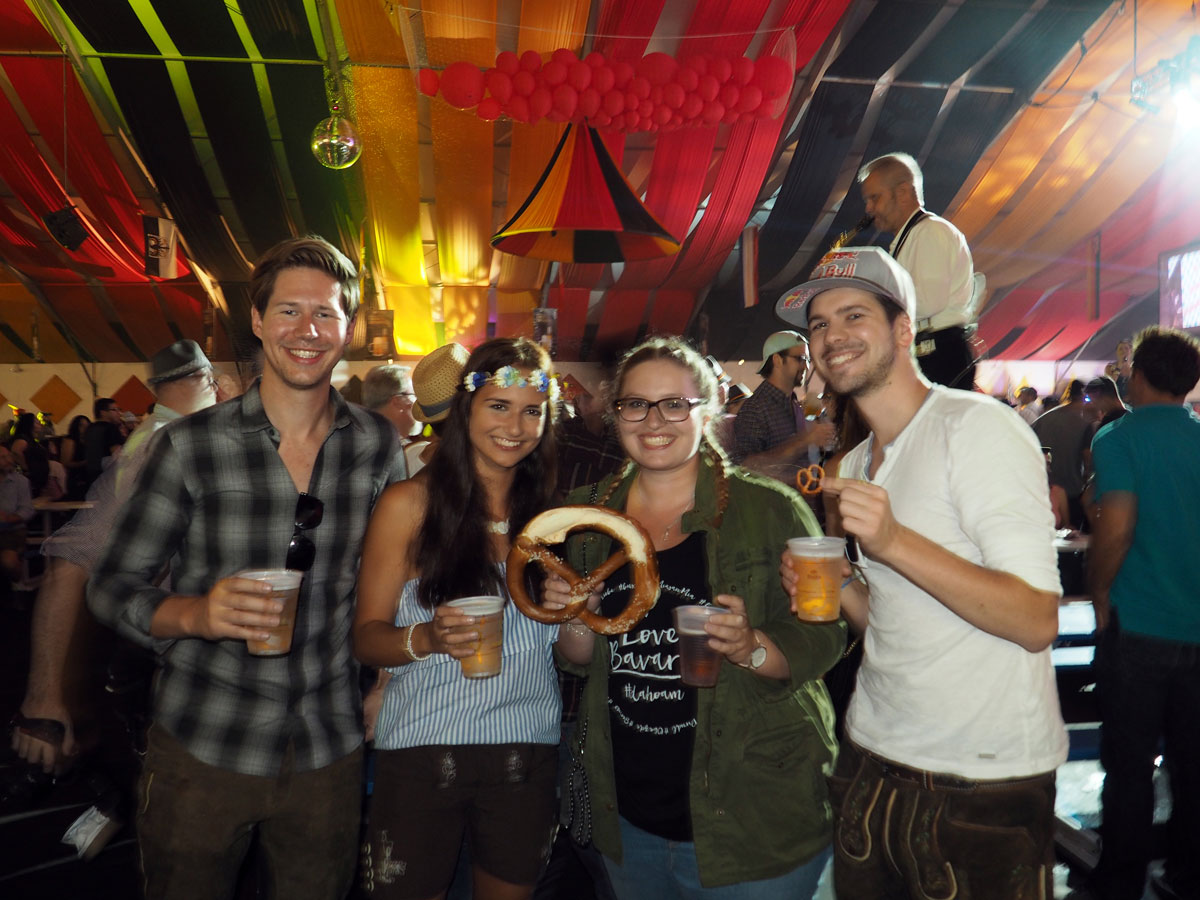 The people have been really creative with what to wear at the Oktoberfest. There were some funny costumes like beermugs on the head, viking helmets and some of the girls were wearing dresses that looked a bit like the traditional german dresses, but they were way to short and the quill under the Dirndl (the dress) is not typical german or austrian. If you want to see how a traditional Dirndl should look like, you can see it on here. There were also some people wearing the traditional Dirndl and Lederhose, most of them germans that are living over here or just visiting the United States and going to the Oktoberfest in their clothes brought from home. I have to admit that i just loved that everybody was dressing up for this occasion. 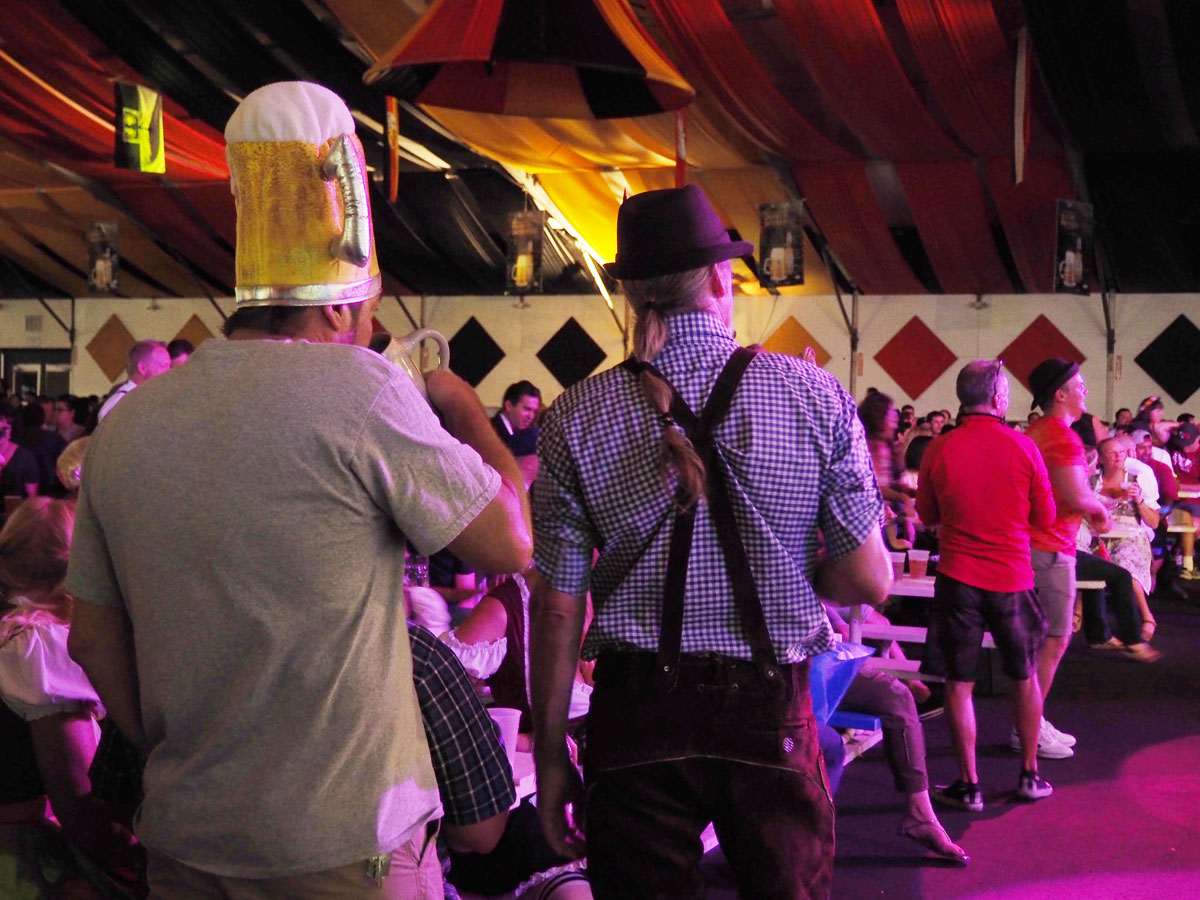 One of the Highlights – Chickendance

When i was reading about the Oktoberfest in Torrance i found out that the Chickendance is one of the highlights. This is different to the one in Germany. I was asking my colleagues here at work why they’re dancing the chickendance and he was surprised that this is not a real traditional german thing. Of course we do dance it (specially after some beer or schnaps), but it wouldn’t be any highlight over there. We would rather have songs like the “Fliegerlied”, “Atemlos” or “Wenn der Maibaum wieder am Dorfplatz steht”.

When they were starting it, a lot of people were going on the stage to join the party dancing the Chickendance all together. I was going up the stage one time as well and it was so much fun seeing everybody in the tent dancing it. The chickendance was played every hour and we always joined them, because everybody got super excited about it. 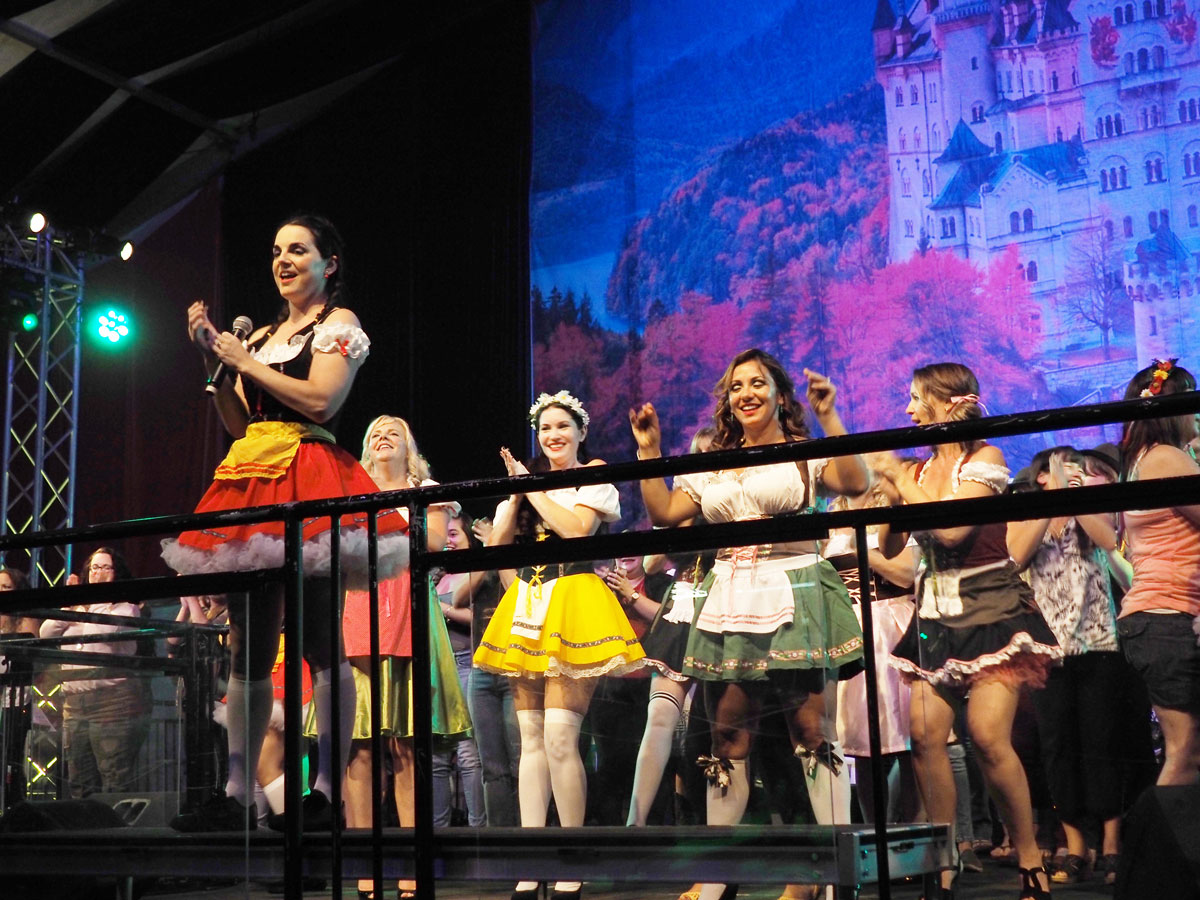 The host of the night started walking around on the tables after a while and then he was doing a short introduction to Bavarian language. “Oans, zwoa, Gsuffa” and “Ein Prosit der Gemütlichkeit” were some of the sentences that he was teaching to the crowd. After the german lesson everybody was singing and shouting to those drinking sentences when they were playing it.

I really loved that they were doing a “Hold the stein” competition. A stein is really heavy and the girl who was winning did so good. The boys were having the chicken challenge with holding up some plastic chicken, which was hilarious to watch. 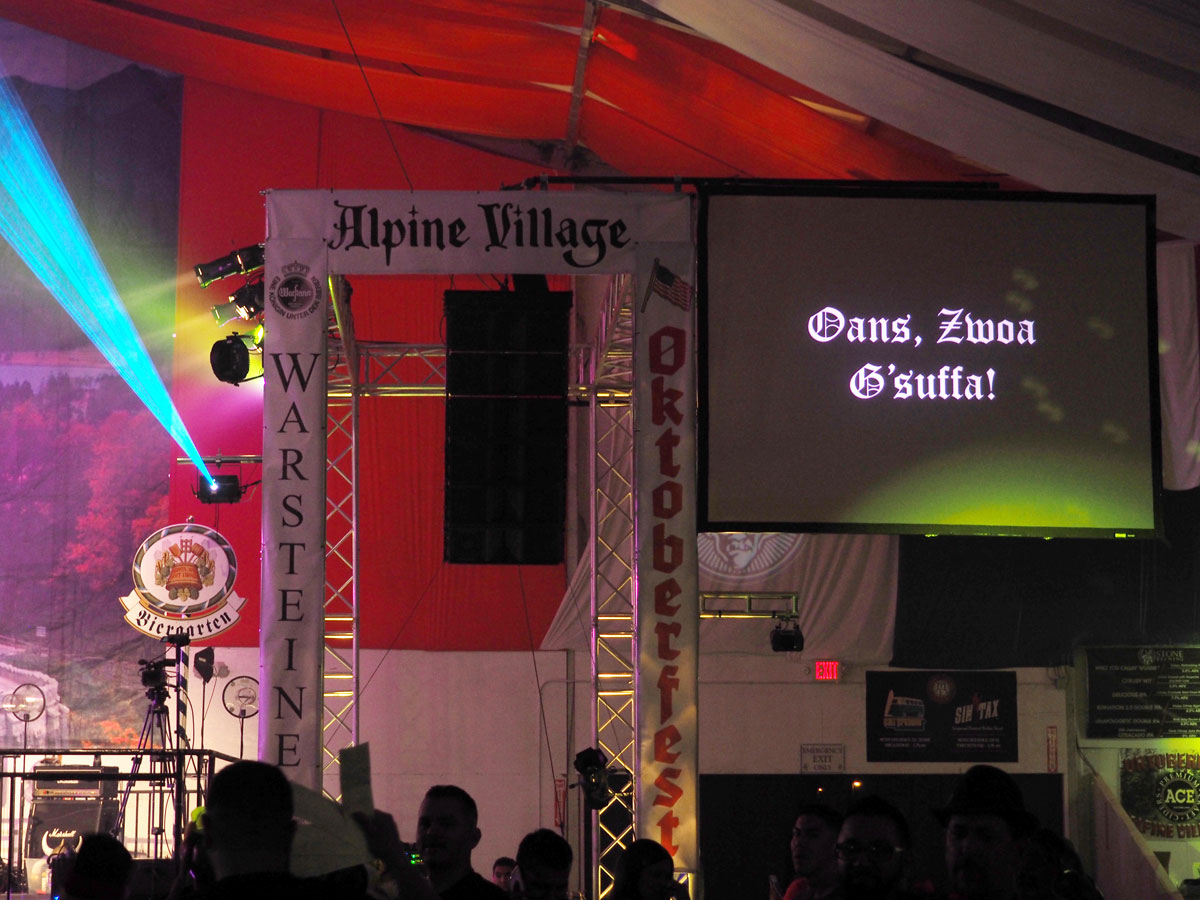 Starting with the traditional german music played by the live band it changed to partymusic after a while. The girl who was singing some of the songs had a really lovely voice and was doing a great show. One of my highlights was the song “99 Luftballons” when all the balloons that were hanging on the ceiling were coming down. 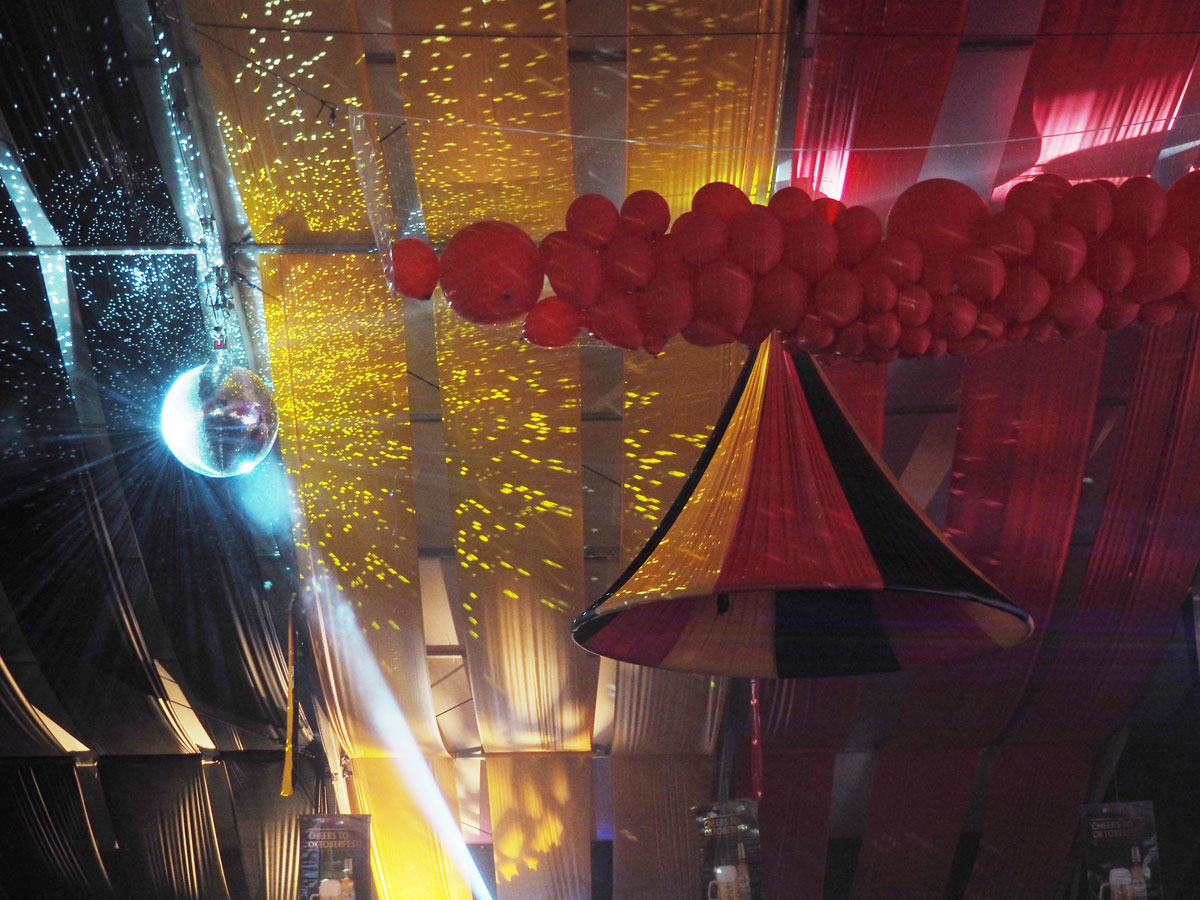 Everybody was singing and dancing and also the host of the night did a good job entertaining the crowd. They were also having a kissing camera and we were having a great laugh on that. 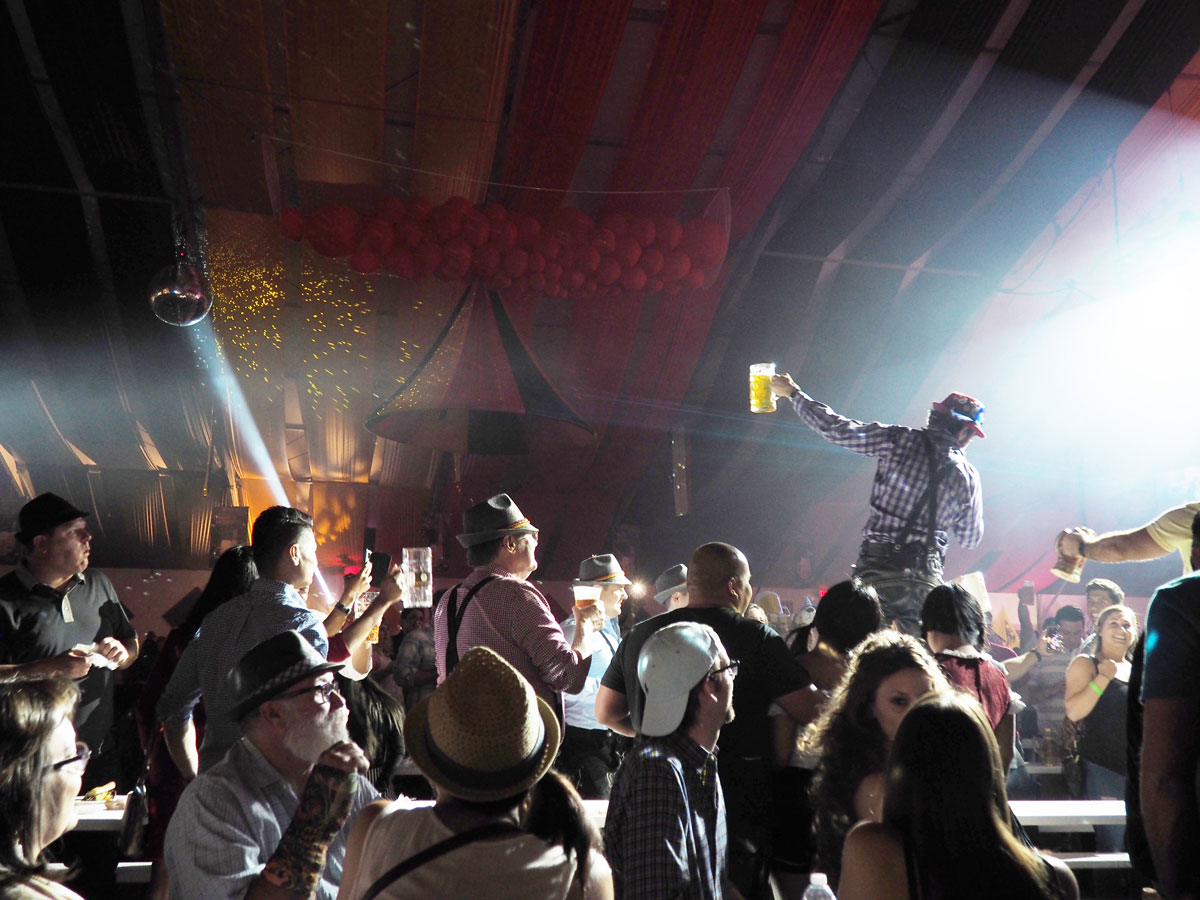 Did i enjoy it?

Oh yes. I was really happy that we made it going there. We were having a blast and were enjoying our time at the Alpine Village Center Oktoberfest. They were offering a lot of additional things such as a photobooth, the atmosphere was great and the people were motivated for singing and dancing and showing their costumes. If anybody is ever going again, i will totally join them going for a second time 😀