The chinese culture has some differences – you will immediatly find out when you get to eat with sticks the first time, so here are some tips to make you happy with your food:

The best and easiest way to get some food is a restaurant where they (for optimists) maybe have an english menu, or at least images. The chinese don’t speak english at all (just some people), so you might pick your food by having a look at the pictures. Some translation tool on the phone can be helpful indeed. Most of the chinese will understand pork and chicken – so you won’t be in danger to get sea cucumber or something else interesting (because you want to eat vegetables and on the picture it looks like an eggplant – it nearly happened to me once 😀 ) 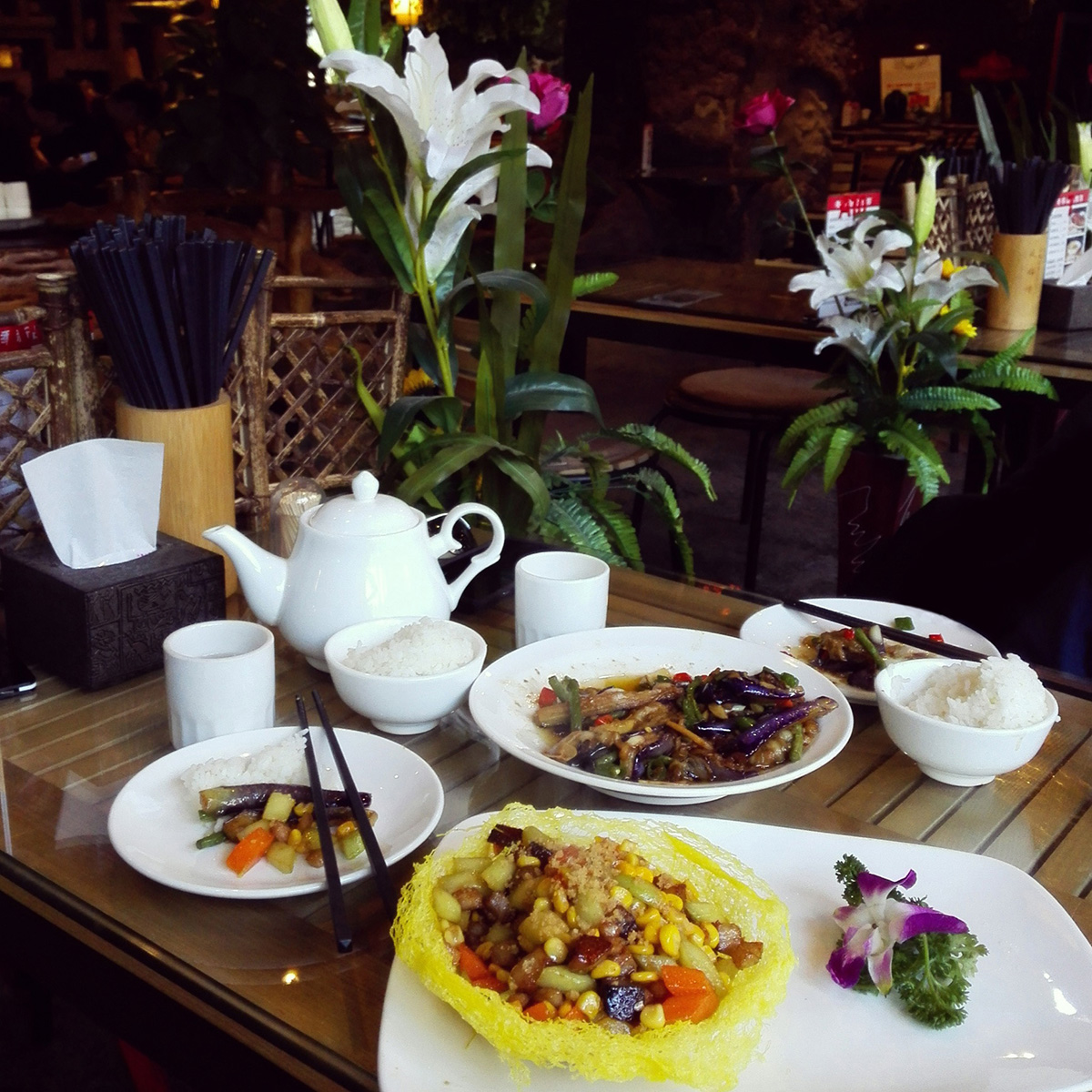 The chinese love to eat meat – you can see that in every restaurant. Vegetarians won’t have it that easy getting some proper food in china, specially when the menu isn’t english, because sometimes you just can’t tell when looking at the pictures if it’s meat or vegetables. I once ordered something called “Vegetables” in the menu…. got some vegetables with ham 😉 I usually eat meat, but i don’t like it every day and specially not when i don’t know where it’s coming from. If you additionally don’t like to eat spicy, you will have a really difficult life. I can recommend the vegetarian dish with eggplants, potatoes and pepper – most of the time the only vegetarian dish which is not spicy (on the left side in the picture). 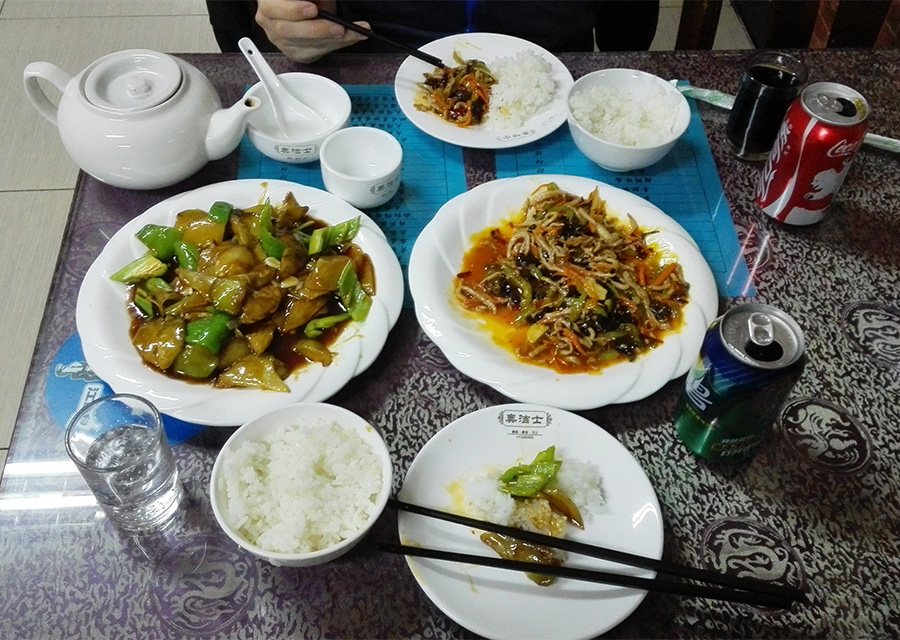 Food in the streets

I was afraid of eating something on the street, because i didn’t wanna spend my holiday in the hotelroom. A friend of mine told me to only eat where a lot of people are eating something. My boyfriend tried some pork-sausage on the street twice and it was fine – you can try that if you like to.

Specialities you can try (need to try)

Dim Sum or also called Xiaolongbao (filled pastry), beijing duck and chinese tea you can try to get some traditional feeling. The pastry is filled with meat (what else? ;)) and a combination of water and vinegar, so be careful when eating it. 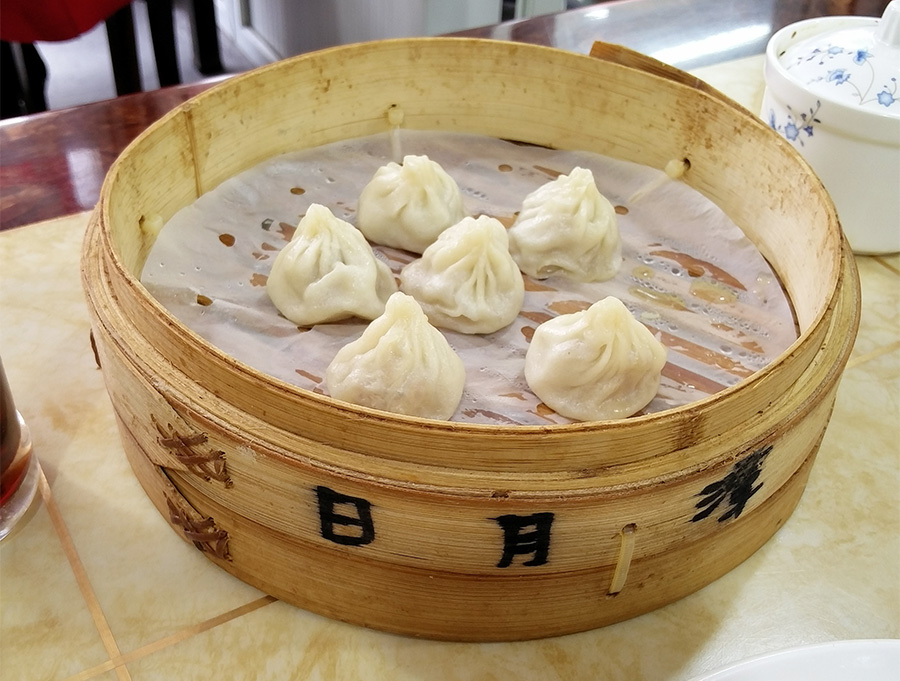 Some of you might already know the restaurant – it’s a restaurant in taipei where everything’s made out of restroom things. It was really really weird but so much fun drinking out of a toilet bowl. 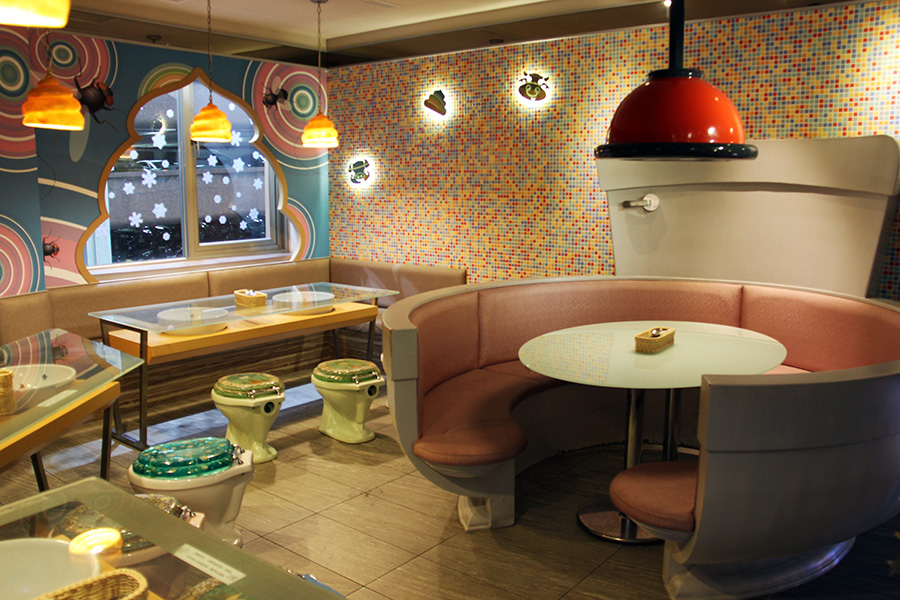 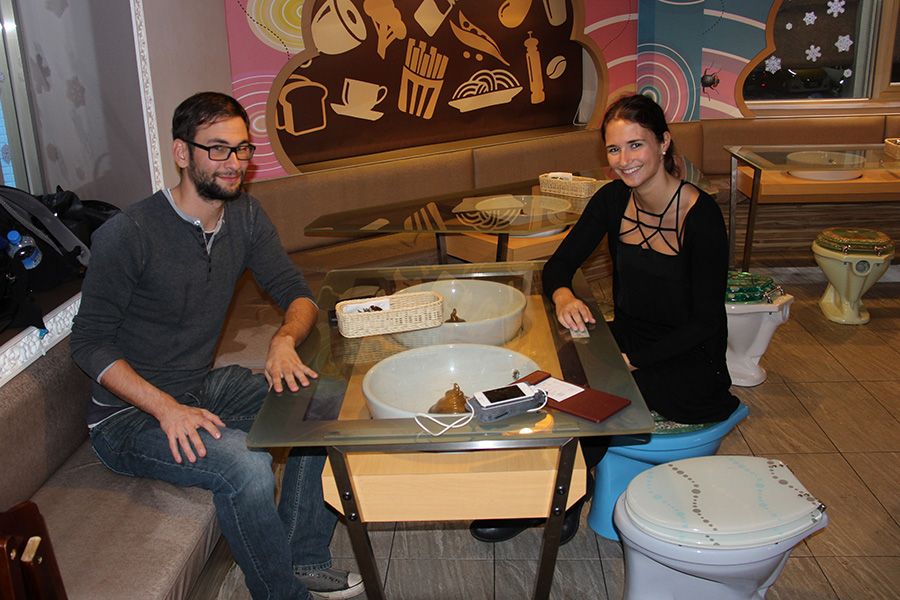 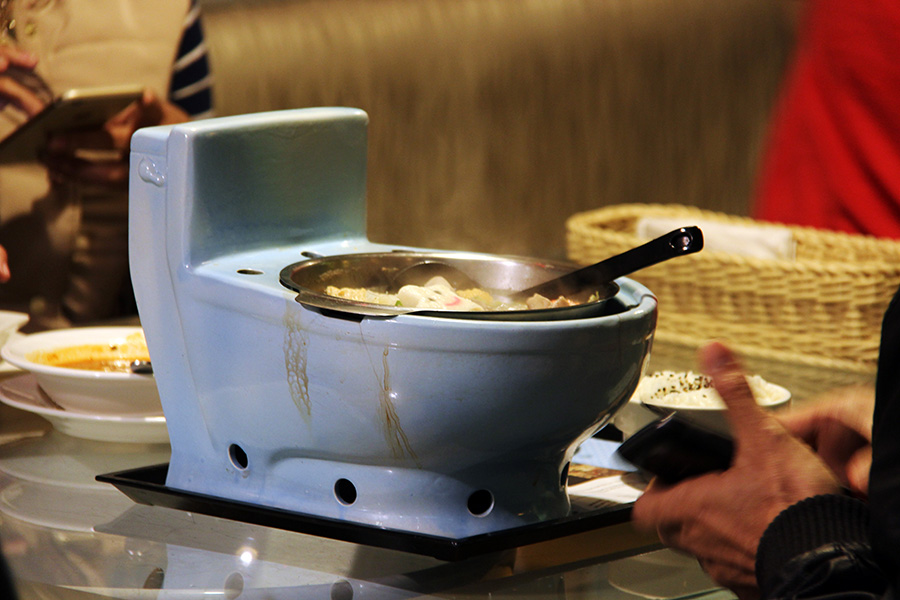 I liked food courts, whenever i find some, i’m eating there – and they have them in china as well. The only difference: you will only find asian food there most of the time 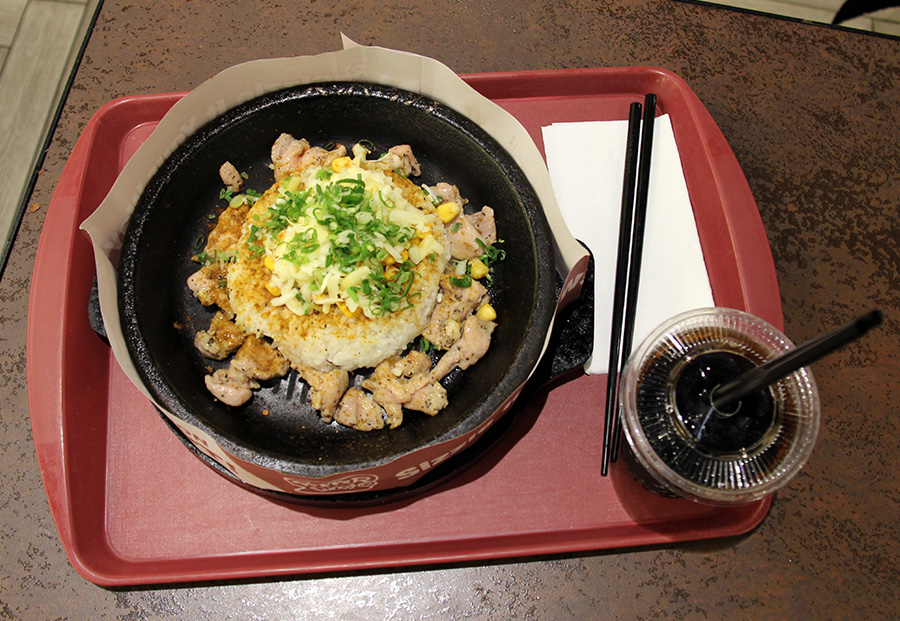 You can find supermarkets everywhere and the bigger ones offer really cheap fast food which tastes good and is way enough for a person like me. They heat it up in the supermarket and you can eat directly there.

You won’t believe me – but the taiwanese know how to make delicious (and for sure not healthy) waffles. 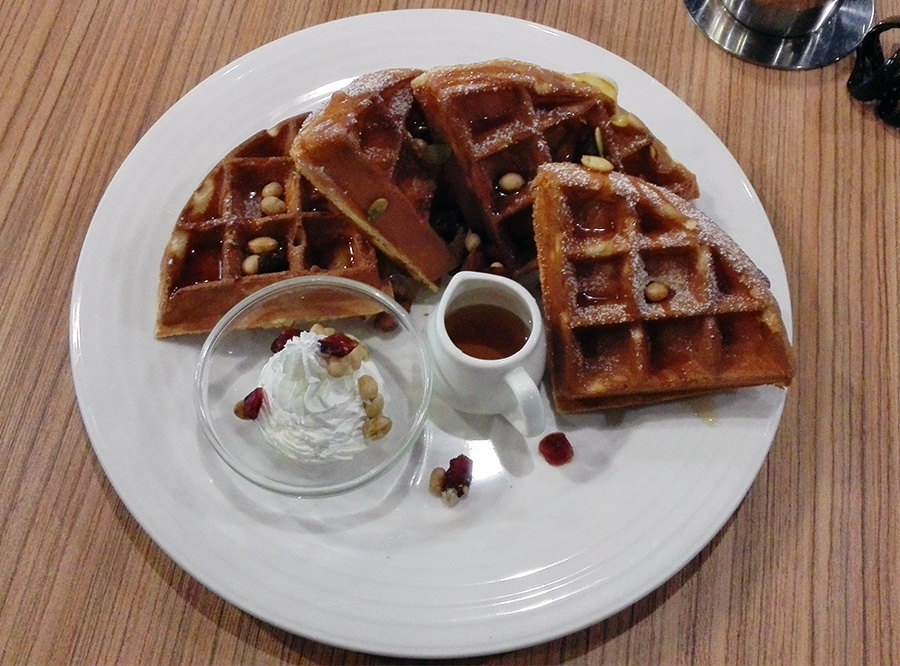 For me as an austrian some good bread is very important and i just love to get my hand on it. Best thing about bread is finding it somewhere on my travels and those chinese bakeries offer really really tasty bread, cakes and everything that i love.
Find a bakery in shanghai on Nanjing Road East, directly in the food court of the shopping center at the metro station or in beijing at the metro station Yiheyuan next to the summer palace. 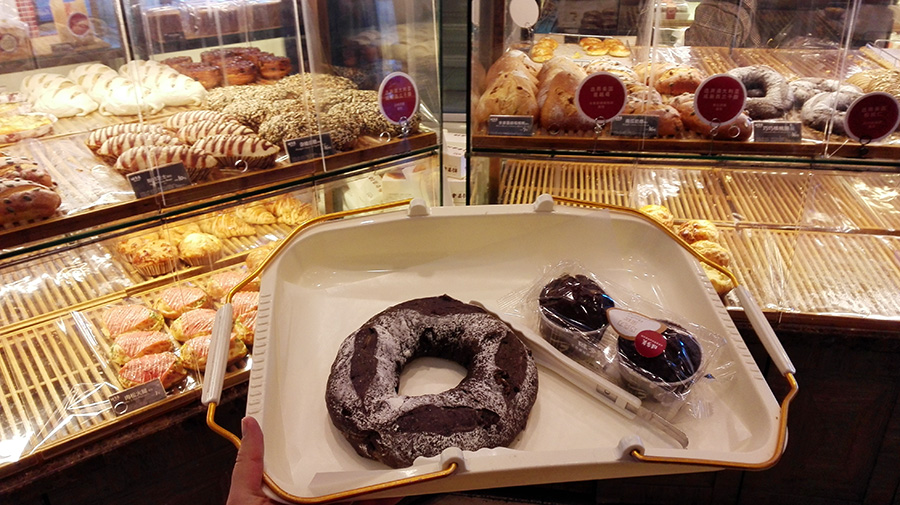 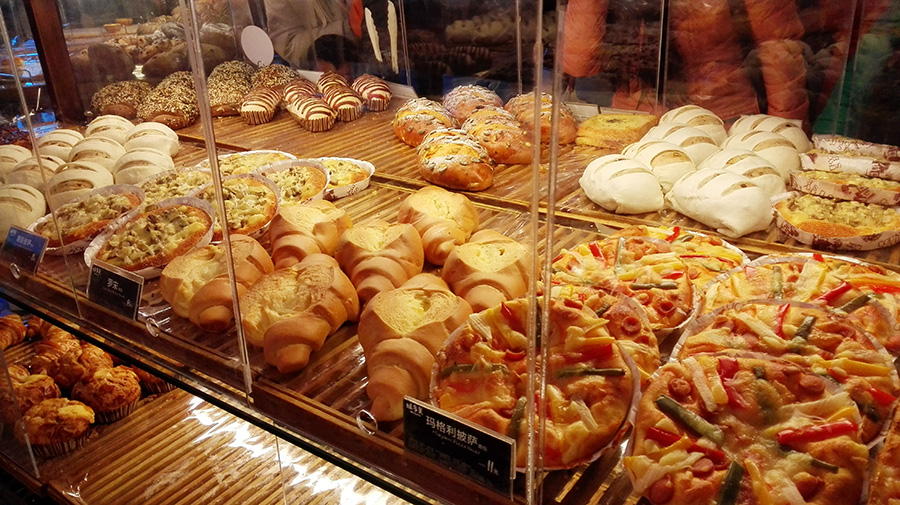